All of NASCAR’s national series are prepared for tight and robust competition during the perennial popular Dover International Speedway tripleheader weekend.

The competitive mindset shifts from the sport’s largest venue at Talladega to Dover’s notoriously tough “Monster Mile” where the track’s all-time winningest driver Jimmie Johnson is hoping to return to Victory Lane for a 12th trophy – in what would be his first series victory since the spring of 2017 at Dover.

“I’ve had Dover circled on the calendar for a while,” Johnson conceded. “It’s going to be different – lots of throttle and probably more like the 2015 rules package that we had there.

“I’ve loved that place since I raced in the ASA Series. I’ve always run well there, so I’m excited to get there. Last time we had a freak mechanical issue before we even started the race and didn’t have a chance to get into the mix.”

No one has been statistically better than Johnson at Dover. His 11-win tally is one of the best efforts in the sport’s modern era – the most wins at a one track since Darrell Waltrip scored a 12th victory at Bristol Motor Speedway in 1972.

The 43-year old California native Johnson has led the most laps (3,105) in history at the track and heading into this weekend’s 400-miler, he boasts a 10.9 average finish and 9.9 average start at Dover – incredible statistics for someone with 34 starts.

The two-year lag in trophies is the longest in Johnson’s seven-championship career and 2018 marked the first time he has gone an entire calendar year without a victory in 18 fulltime Cup seasons.

Johnson’s No. 48 Hendrick Motorsports Chevrolet has four top-10s through the opening 10 races of the season but comes to Dover after a disappointing 33rd-place showing at Talladega where he blew a right front tire after running over debris only 26 laps into the 188-lapper. The finish dropped him from 13th to 16th in the standings.

But the rough last outing has not dampened Johnson’s enthusiasm, confidence or hopes when it comes to competing at Dover International Speedway.

“It’s the site of so many good memories for me, I can’t wait,” Johnson said.

Saturday’s Allied Steel Buildings 200 at Dover (1:30 p.m. ET on FS1, MRN, SiriusXM NASCAR Radio) is the fourth and final round of the popular Dash 4 Cash incentive program. Last week’s Talladega Superspeedway winner Tyler Reddick, along with Chase Briscoe, Christopher Bell and Gray Gaulding are eligible for the final $100,000 bonus. The highest finisher among the four on Saturday will win the money.

Bell (at Bristol), Cole Custer (at Richmond) and Reddick (at Talladega) are the previous three 2019 bonus check winners.

Bell is the only driver among the four currently eligible with a previous Xfinity Series victory at the notoriously tough Dover “Monster Mile.”  He won in the series last visit to Dover in October, 2018. He has finished top-five in his two starts on the track and led 110 laps. Reddick won the 2015 NASCAR Gander Outdoors Truck Series race at Dover. He has one top-five in three Xfinity starts and led 23 laps. This is only Briscoe’s second Xfinity race at Dover. He finished 19th in his debut last Fall. Gaulding also has only one previous series start at the track, finishing 34th in 2017.

JR Motorsports driver Justin Allgaier is the defending race winner. He, Bell, Jeff Green and Morgan Shepherd are the only former winners entered.

The NASCAR Gander Outdoors Truck Series returns to competition after a four-week break in the schedule with the JEG’S 200 (Friday, May 4 at 5 p.m. ET on FS1, MRN, SiriusXM NASCAR Radio). The series kicks off the tripleheader NASCAR weekend with what has typically been a very competitive race.

Two-time series champion Johnny Sauter has won the last two races at Dover’s “Monster Mile” but returns to try and become the first ever to win three consecutive after switching teams and manufacturers from Chevrolet to Ford power.

Current championship leader, Canadian Stewart Friesen, hopes to improve his history on one of NASCAR’s most historic tracks. He holds a six-point edge on Grant Enfinger in the standings coming into the weekend’s race. But Friesen has an averages finish of 25.5 at Dover, crashing out in both of his previous starts at the track. Enfinger’s average finish at Dover is 8.5.

Two-time series champ Matt Crafton and Sauter are the only former winners in Friday’s field.

What to Watch For: Richard Petty won the first Dover race on July 6, 1969. … Jimmie Johnson is the all-time winningest driver at Dover with 11 victories and his 3,105 laps led is an all-time best too. … NASCAR Hall of Famer Mark Martin holds the record for top-fives (24) and top-10s (33) at Dover. The seven-time Cup champion Johnson leads active drivers with 17 top fives and 24 top 10s in 34 starts. … Eight drivers in the field have won previously at Dover. … Johnson (11), Ryan Newman (3), Kyle Busch (3), Kevin Harvick (2), Martin Truex Jr. (2) have multiple wins. … Since 2000, there have been five back-to-back race winners – Johnson (2002 sweep, 2009 sweep, 2013-14) and Newman (2003 sweep). … Kurt Busch has the most starts (37) among active drivers. NASCAR Hall of Famer Ricky Rudd holds the record at 56 starts. …Johnson leads all drivers this weekend in four of the six key Loop Data Statistics, including driver rating (114.4). …. The outside pole position has produced the most Dover race winners (18). Three times in just the last five races, the second place qualifier has won. ….The deepest a Dover race winner has started on the grid is 37th (Kyle Petty, Spring, 1995). Martin Truex Jr. holds that distinction among current drivers, winning his first ever Cup race at Dover from the 26th position in Spring, 2007. … Truex and Jody Ridley (May, 1981) are the only drivers to score their first career series win at Dover.  … Clint Bowyer and Denny Hamlin have the most starts (26) without a Dover Cup trophy. … Among drivers with at least 10 starts, Kyle Larson boasts the best average starting position (8.8). … NASCAR Hall of Famer David Pearson has the most pole positions (four) at Dover.  … No active driver scored his first pole at Dover. ….The last five races have been won by five different manufacturers. …. Chevrolet has won 40 of the 98 Dover Monster Energy Series races. … Jimmie Johnson not only has the most wins but also prevailed in the closest race in Dover history, edging Kyle Busch by .080-seconds in September, 2005.  …. Johnson has won three of the four overtime races at Dover (Fall, 2005; Spring 2015 and 2017) His Hendrick Motorsports team has won four of the five (Chase Elliott, Fall, 2018). …. Hendrick Motorsports has 20 wins at Dover – the third most victories at a single venue. Junior Johnson’s team had 21 wins at Bristol and Hendrick currently has 24 wins at Martinsville.

The Date: Saturday, May 4

What to Watch For: Justin Allgaier is the defending race winner, earning the first of his career single season-high five races at Dover. …. There are four former winners in Saturday’s field – Allgaier, 2018 Fall race winner Christopher Bell, 2001 winner Jeff Green and Morgan Shepherd (1986). … There have been eight different winners in the last eight races, however Dover has seen multiple winning streaks. Just since the 2010 season, Kyle Busch swept the 2010 and 2014 seasons, Carl Edwards swept 2011 and Joey Logano won four straight, sweeping the 2012 and 2013 seasons. Ten times a driver has won back-to-back Xfinity races at the track. …. Manufacturers have had even more luck in consecutive races. Since 2000, Chevrolet has won back-to-back races six times, Toyota five times and Ford three times.  … Joey Logano and Harry Gant are tied for most pole positions in race history with five each. …There is a tie for first place in the Sunoco Rookie of the Year standings between GMS Racing’s John Hunter Nemechek and Stewart-Haas Racing with Fred Biagi’s Chase Briscoe. Both have previous Dover starts in the series. … Tyler Reddick – last week’s Talladega Superspeedway winner – leads the series standings by 32 points over Bell. … Bell’s average finish of 4.9 this season is best in the series. … Joe Ruttman won the first Xfinity race at Dover in May, 1982. … The late Dick Trickle is the oldest Xfinity Series pole winner in track history. He won the pole for the June, 1999 race at the age of 57 years, seven months and nine days. … Harry Gant is the oldest Xfinity race winner at Dover. He won in Sept., 1991 at the age of 51 years, 1 month.). …. The front row has proven to be the winningest starting position. Nineteen times in 70 races, the winner has started first or second. …The last polesitter to win was Kyle Larson in Spring of 2017.

What to Watch For: Johnny Sauter has won the last two Gander Truck races at Dover and this weekend he will try to become the only driver ever to win three straight truck races at the track. … Kyle Busch is the all-time winningest driver with four series victories. … NASCAR Hall of Famer Mark Martin and Kyle Busch are the only drivers to win in all three NASCAR national series races at Dover. … Only twice in the race’s 17-year history has a driver won consecutive races – Sauter in 2017-18 and Kyle Busch 2013-14. ….Of the three active manufacturers, Toyota has the most wins – double that of the next closest. Toyota has eight victories, Chevrolet, 4 and Ford 3. …Toyota drivers earned the longest winning streak for a manufacturer – winning seven straight from 2008-14. … Harrison Burton leads the Sunoco Rookie of the Year standings by 15 points over Sheldon Creed. … Stewart Friesen leads the championship by six-points over Grant Enfinger. … Friesen has averaged 25.5 average finish in two races. …Toyota has won every Gander Trucks race in 2019…. Tyler Reddick is the youngest series winner at Dover, taking the trophy in 2015 at the age of 19 years, four months, 18 days. …. Popular young racer Natalie Decker, 21, will make her “Monster Mile” debut this weekend. It’s her first truck race since a 13th-place finish at Las Vegas on March 1. … Only two former winners are entered this week – Sauter and fellow two-time truck champion Matt Crafton, who won in 2016. 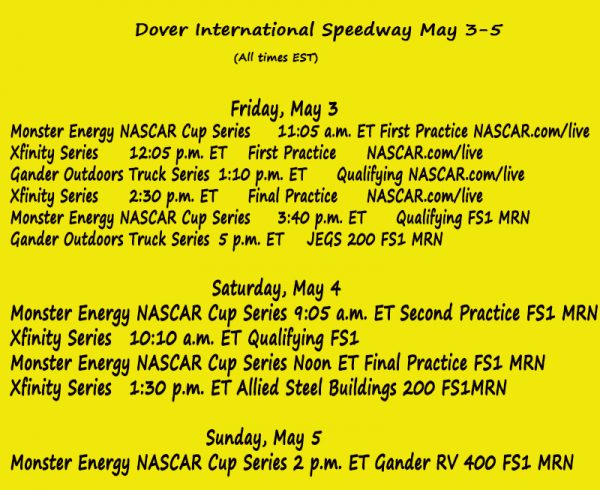